The Spring Grand TUA feast was the first feast which required me to cook more than one dish, coordinate team members, and participate fully in every course. It was an incredible learning experience.

The original concept suggested by the event steward was a sort of Iron Chef-style competition between the Borealis Culinary Guild and the Montengarde Culinary Group, playing on an old rivalry between the baronies. In the end, we decided not to go down that road. I really didn't have enough support for the idea on my end, and both sides agreed that it might be better to put together a cooperative effort and learn from each other. Therefore, the feast became the Feast of Friendship.

There were some organizational challenges involved in coordinating two separate teams in two different baronies - we were communicating pretty much exclusively through Facebook, so it was a little challenging to keep on the same page and figure out who was responsible for what. In the end, though, I'm really happy with what was put together and I think everyone represented themselves well.

- Working with Mistress Coryn and Mistress Joan was really interesting, because they have so much experience. It was awesome to see how they worked and organized themselves in a kitchen almost automatically. They just knew what had to be done and when.

- I think all of the food was excellent and received well. There was not a dish that came out of the kitchen that I was dissatisfied with in any way.

- I had an excellent time working alongside Mel, Asa, and many other volunteers who popped in to help for a while during the day. Tons of people stepped up to help clean, serve,  and prep. Folks are super generous with their time.

- We had sufficient food for everybody, even though I was really nervous about the amount of everything we had!

- I think having a printed menu was really nice. It's good to have something for folks to look at so they know what they're eating.

- The kitchen space was a bit unusual, but functional for the most part. Not a lot of fridge space, but there were loads of sinks and dishwashing stations. However, we ran out of water when we tried to clean at the end of the night...which meant it took way longer to finish than it should have, and I had to leave before the work was done.

- There was an administrative problem which resulted in an entire extra table being present than we had accounted for. Fortunately, we managed to wrangle food for them, but it was a bit touch-and-go. It's a reminder for me that you must always, always maintain almost excessive communication with the event steward whenever possible, and make sure there is ample extra food just in case.

- There was a slight issue with someone on said table being a vegetarian, and a gentle was upset on their behalf that there was no vegetarian option. How many people does there need to be with a dietary concern before you should accommodate and cook a separate item?

- We served about 30 minutes late due to sharing the kitchen space with the lunch crew, which we did not anticipate. However, everybody seemed okay with this and it didn't really damage the flow of the event. Fortunately, Their Majesties were super flexible and accommodating. 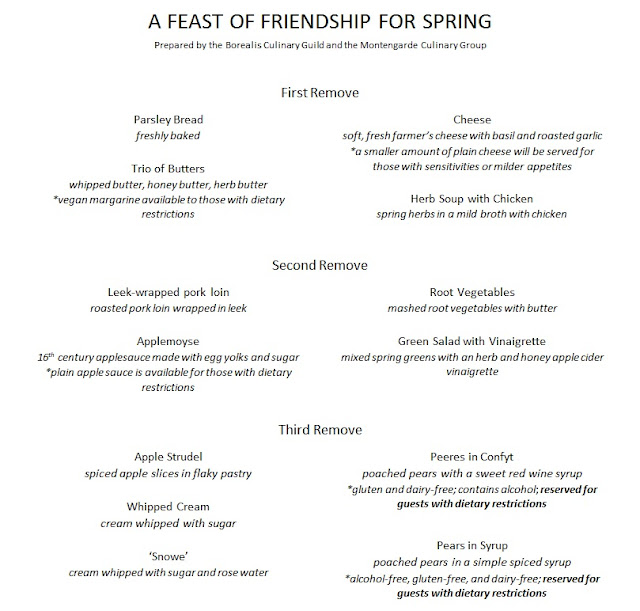