I am not a great sewer. The first time I ever put a stitch in anything was all the way back in Grade 8 Home Economics class - I made a pillowcase in an entire semester. The next year, I think I made novelty dice or something. In any case, after that point, I didn't touch a sewing machine until I joined the SCA at 24 years old.

The first time I went to an SCA event was when I was 17. My friend Nikki brought me and sewed me a cute little chemise with eyelet lace, a boned bodice, and a brown wool skirt. I loved it and wore it many times after, but never really got into the whole SCA thing. I was a little too young, and she had her two beautiful children shortly after and stopped playing. (She's sitting there next to me, but you can't see her face!)

I re-joined the SCA at the Ghoul's Night Out demo in 2013. I borrowed an outfit from a gentle whose name I can't recall - in a weird twist of fate, Bjar picked this same Houppelande-type-thing up for me at a recent Tavern Lost and Found auction. 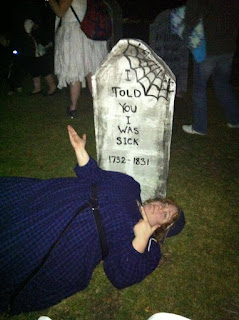 The first garb I ever had was made for me by Bronwyn, who was the very first person I met in the SCA and who "adopted" me and made sure I had people to talk to and places to sit, etc. It was a bright pink underdress (this is affectionately called "the pink terror" in my household) and a yellow faux-linen apron dress. It was not an attractive look, and I wore it with visible socks and sneakers since it was a little too short - fortunately, no photo evidence remains. I still have the pink terror, though I dyed it a little bit darker so it's not quite so frightening.

The second dress Bronwyn made for me was a yellow linen-esque kirtle, and I have never ever been happier with a garment. It felt so special to have something of my very own that I didn't have to borrow! I definitely felt like I fit in much better. Unfortunately, over time it's started to fall apart a bit and it's now much too big. I still have great affection for it, though!

My next outfit was made by my very good friend and de-facto head of our household, Caterina (soon to be Laurelled) and was absolutely gorgeous - yellow silk stays, an Elizabethan kirtle and a rich green wool gown - but I've lost so much weight over the past two years that I can't even pretend that they fit now! Absolutely tragic. I know I would wear them much better now. I am not the soul of elegance, so I wore it kind of like I was a Viking in drag. Not a great overall look.

I have helped with fittings for others, and helped with some construction - but, I have yet to really attempt any garb from beginning to end. I have such a difficult time knowing where to begin without a paper pattern. I managed to make a Regency dress out of the world's cheapest cotton broadcloth all by myself - however, that was with a commercial pattern with a healthy set of instructions.

For the past year, I've borrowed a couple of sets of basic garb from another very good friend, Brigida. I have loved wearing them. They are durable, comfortable, and light - a linen apron dress and underdress, and a simple short surcote. She has been so patient with me and has let me wear them for ages, but I feel bad keeping them for so long and feel like it's time to return them. 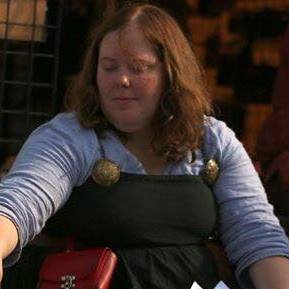 Last summer, I made a palla and a tunica - both Roman garments. I love Roman clothing, but the fabric I chose wasn't really quite right for the purpose and the palla ended up very heavy and quite unwieldy. I am hoping to pull these apart and make something a little bit more serviceable for heavy wear in the kitchen and at camping events, and simple enough that my changing size won't fundamentally alter their appearance.

I poked through the Medieval Tailor's Assistant a little and looked around at events a bit, and what I think I want is a basic cote and a sleeveless surcote. Most of the ladies who work regularly in the kitchen wear similar, since they are great for moving around, rolling up your sleeves, and are not so dear that you would cry if you slopped on them. They have the added bonus of requiring a head-covering, which is definitely way more sanitary in a kitchen setting.

My heart will always be in the Renaissance, but dipping back into the Medieval period for a bit is probably more practical for the moment! Hopefully, I will have enough fabric to make a cote in the lovely golden yellow color and a surcote in the dark blue. We'll see how it all turns out!