It's been a little while since I posted, but it's been a very eventful summer!

At Quad War, I was really honored to be taken as Coryn of the Wode's protégée in a short ceremony after we finished the annual Newcomer's Breakfast. We had decided that a yellow belt was an important sign of our formal relationship, and so she presented me with one (and a cute t-shirt she bought at 50 Year!) The wearing of a yellow belt isn't very typical in An Tir, but it is very common in Northshield and in many other kingdoms around the world.

I didn't really know what to say at the time, but I do take our relationship very seriously and I've already learned quite a lot from Mistress Coryn. I feel like there are many more years of learning to do. She has an approach to the game (and to life!) which I really respect.

There is a joy and energy that she brings to service that I really admire; she doesn't get bogged down in what other people are doing and what they think of what she's doing, she just focuses on doing a good job. She has a real calmness and ability to adapt quickly to changing situations with grace, which I think is really amazing. It's a real privilege to have the chance to learn from her. 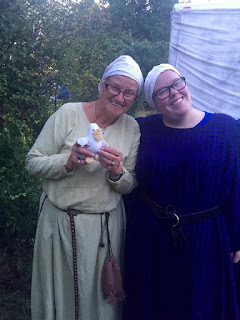 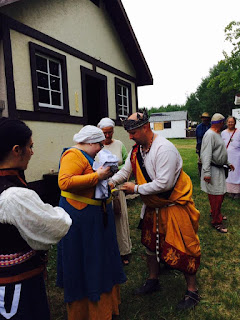 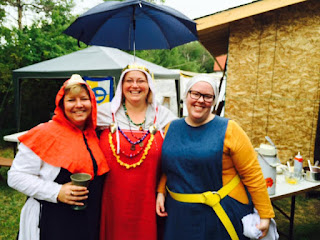 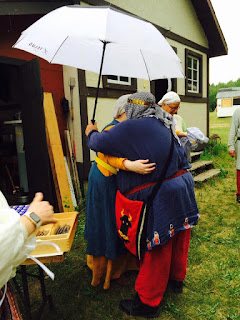 I had the opportunity to help Coryn out a bit at Sergeantry Trials, too - she provided a full menu for two days for the prospective and existing sergeants, plus the barons and baronesses in attendance. It was such a lovely, community-oriented event. It was really special to feel like you could personally sit and chat to every single person in attendance, and I got time to hang out with some people I don't normally see. There's sometimes a tendency to feel that bigger is always better with events, but there's a real charm to the smaller ones, too. 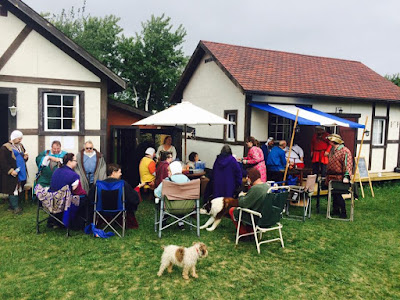 Other highlights of the summer have included the Montengarde Culinary Group furiously planning for Samhain! We've taken on the responsibility for feast, and it's our first time ever working as a team to feed a whole event. There have been some very stressful moments, but I think things are coming together now. Frances is leading the team this time, and I think she has a really good eye for what works and what isn't going to work well. The menu is finalized and we're testing one more time in October before the big day. I'm in charge of making pea soup and apple galettes.

During this reign, I have had the really special opportunity to serve on retinue for the first time for Queen Inga. What an incredible person! She has so much experience and knowledge, but she is still so approachable and poised. I am really inspired by the love she shows for what she does, and it's been so special to learn a lot more about that aspect of the game from my time on retinue.

As I mentioned, I also joined Polyphonia, which is our local period singing group! I've never been part of anything similar, so I'm enjoying the challenge. I'm trying hard to learn as much as I can so I can join in at some performances!

Lastly, this week is my final week as Family Activities Coordinator in Montengarde. I served the full two years, and I feel like I learned a lot. It may be a little while before I take another office, but I feel much more informed and involved in how the SCA works as a result of my time on the council.
Posted by Allie at 07:58