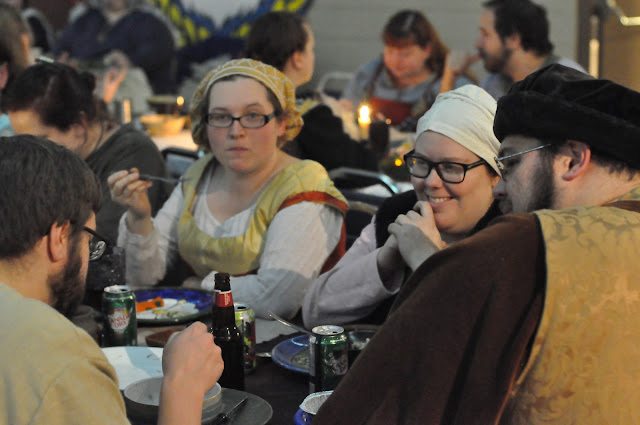 Yule was, as always, pretty fantastic!

Andy had the weekend off, so decided to join me in my trip up to Borealis. He doesn't play at all, so this was a really special treat for me! We were kindly hosted on Friday night by my Pelican, Coryn, and her husband Dirk. They wined and dined us and we had an extremely good time chatting with them and Bronwyn and Peregrine well into the night - nobody does hospitality like the Vanderzees, and that's a fact!

The event itself was really busy for me. I had a wonderful opportunity to judge a single A&S entry, which was a real privilege and honor for me. I was really touched and inspired by the passion and enthusiasm the artisans in Borealis show for every aspect of A&S in the Society, and it left me feeling really positive about the A&S community in Avacal as a whole.

Phillipe, the outgoing champion, gifted me with a bag of felting wool for my new hobby as a thank you. It was one of the nicest and most personal thank-you gifts I have ever received from anyone in the SCA and I was really moved. (The other was a tiny whisk and some small containers from Baroness Una for my cosmetics experiments - I use them regularly!)

Yule was also Caterina &tc.'s post-vigil, which we were kindly given space for by the event team. It was lovely to see so many people stop by and congratulate her, and although the offerings in terms of food and drink were not as ambitious as I originally hoped, I was happy that we were able to provide some gluten and lactose-free pasties for everybody to enjoy.

The feast was really awesome, too! It was a really ambitious undertaking by Mel, for whom this was her first event as feast steward. I cherish every opportunity I get to see the Borealis Culinary Guild in action, because I always take away at least one very important pointer every time! Lots of extremely period dishes with good flavors, and I enjoyed the company of Bjar, Peter and Brangwayn, and Drifa and her beau at dinner. Andy felt very welcomed and really enjoyed all of the dishes, but we sadly had to leave a little bit before the end of the meal to drive home.

I always, always enjoy Yule - one of the highlights of the Avacal calendar for me. A massive thank-you to all of those involved in its organization in 2016!
Posted by Allie at 12:43